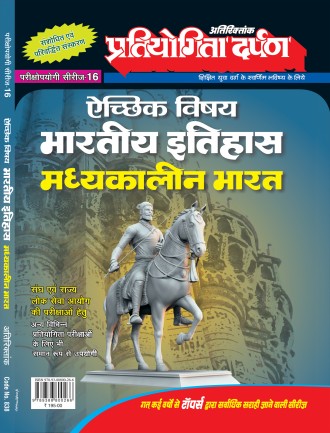 Technique and approach, in shaping this publication on Medieval Indian History as an optional subject in the Main examination for Civil Services of UPSC, has been elaborate, comprehensive and analytical. India’s medieval History began with the death of Harshavardhana – the last Hindu emperor of India that immediately brought Rajputs to prominence in North India. Though Rajputs were a warrior community but had major drawback of lack of unity among themselves, often at war with each other, and squabbling; this unfortunately facilitated entry of Turks in India. Then there were the Battles of Tarain, also known as the Battles of Taraori that were fought in 1191 and 1192 near the town of Tarain (Taraori), between Prithvi Raj Chauhan - the greatest Rajput warrior and Mohammad Ghori in which the former got badly defeated giving rise to a new era in the history of India. In this edition we are providing complete coverage of medieval history that specifically focuses on Rajput period: from 750 AD to 1200 AD, origin of Rajputs and their dynasty, Muslim period: 1200 AD to 1707 AD, Mughal administration and Industrial development, urban and rural life in the age, development of Science and technology; expansion of Maratha power, and emergence of new regional states.

Medieval Indian History is an essential component of History, without which the study of subject remains incomplete. It has been noted that analytical questions on Medieval History have regularly been asked in the exams, we have as such devised this book keeping in mind this pattern and trend of questions. Once students go through this book, it is our challenge that they will not find themselves in diffident situation in the examination hall to tackle questions on the subject.

Upkar Prakashan / Pratiyogita Darpan editorial board has come up with this edition of book by embedding acumen and sagacity in contents that may enable students to prepare their own notes for revision at the nick of the hours before exams. In order to make the task of remembering highly troublesome and tedious details of Medieval History, topics in the book have been presented in the form of a story to make them interesting. The authors and experts have taken pains to incorporate tables and charts to make notes interesting thereby facilitating quick revision by students.

This edition has twin considerations of facts and analysis in describing topics. The analysis regarding various important kings that ruled the country, their policies and administrative systems, society and economic system, and other important points related to the empires of Medieval India have been deeply analyzed and broadly elucidated. A systematic study of the book will be of great help for our dear readers and competitions’ aspirants.