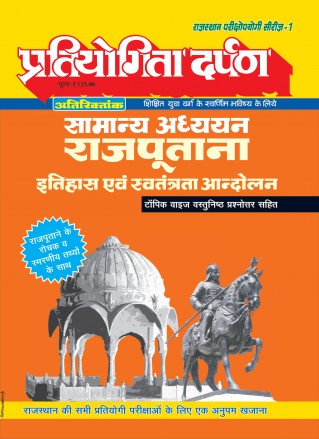 The book is elaborate commentary on the ancient civilised history of Rajasthan which goes back to 5,000 years ago when in the present day districts of Jhunjhunu and Sikar, along with other areas of Jaipur district bordering south Haryana, formed the part of Vedic state of Brahmavarta along with districts of Mahendragarh and Rewari in Haryana. We have prepared the issue with our pious approach towards keeping the facts and concepts buried in the sands of the Thar Desert of Rajasthan intact and interesting. The book in the step by step analysis reveals that Revered Saraswati and Drishadwati rivers formed the ancient Rajasthan called then Brahmavarta state. Drishadwati river is identified as the Vedic Drishadwati by Bhargava. It is our endeavour that through our description we lay bare the uniqueness of the history of Rajasthan and with the passage of time how it was influenced and unfolded. It is now an established fact on which most of the historians agree that parts of Rajasthan may have been occupied by the Indus Valley Civilization (Harappans). The book throws light on the recent excavations at Kalibanga in northern Rajasthan around 1998 which revealed the existence of human settlements of Harappan times on the banks of a river that dried up later, which some people believe to be the Saraswati. The book is authentic and comprehensive in bringing to light the truth put forth by the archaeologists about Saraswati which will unlock mysteries of the past. The unique position of Rajasthan's geographic location in India has caused it to be affected by the expansionist efforts of various empires. It was a part of the Maurya Empire around 321-184 BCE.

No mention of Rajputana history is complete without giving a glorious account of Maharana Pratap, a Rajput ruler and great warrior of his time. Mughal emperor Akbar sent many missions against him. However he survived and ultimately gained control of all areas of Mewar excluding fort of Chittor. The beauty of this book is our chapter on Prithviraj Chauhan who defeated the invading Muhammad Ghori in the First Battle of Tarain in 1191 and in fifteen further battles before himself being defeated when he was betrayed by one of his own. So with interesting and memorable facts of Rajputana including famous historical sites contribution of women in development of Rajasthan civilization which the Ancient inscriptions of Rajasthan abundantly revealed have all been made integral parts of this crispy but intellectual edition.

There is no denying the truth that this book satisfies the needs of the aspirants in holistic manner as it narrates the varied aspects of Rajputana history with curious enlightenment whether it is the information regarding the self respecting women folks or its rich cultural heritage. When Rajput rulers lost their lands to invaders during the medieval period, their womenfolk would commit suicide by self-immolation on a pyre. This was a gesture to protect their chastity and self-respect, and it was known as Jauhar. The students very clearly will learn that how during modern history Rajasthan many invasions by the Marathas, under military leadership of Holkars and Scindhias took place. Most of Rajputana passed under the control of the Maratha Empire and continued to pay tribute to Pune till the British East India Company replaced the Marathas as paramount rulers. Following the Mughal tradition and more importantly due to its strategic location Ajmer became a province of British India, while the autonomous Rajput states, the Muslim state Tonk (princely state), and the Jat states Bharatpur, [Dholpur] were organized into the Rajputana Agency. In 1817-18, the British Government concluded treaties of alliance with almost all the states of Rajputana. Thus began the British rule over Rajasthan or Rajputana.