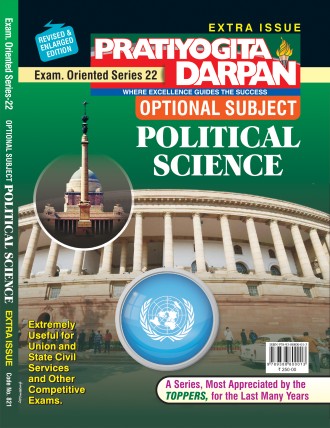 Optional Subject Political Science (English Magazine) is a multipurpose study tool which is extremely useful for UPSC and state civil services and other competitive exams. Beginning from political theory the magazine incorporates key concepts in interpretative manner laying down the political ideas and theories with crystal clear approach.

With an updated version the magazine issue addresses the core concerns of the students related to complex nature and philosophy of this discipline. Thus changes have been introduced in every chapter. This is an authoritative and comprehensive compendium with coverage of the whole of the syllabus of Political Science and hence can be of immense use for the range of competitions in which Political Science is the subject. All the chapters in the magazines have been thoroughly revised and updated to include recent developments in India and world politics.

The magazine encompasses as ticklish topics as Political theory, Political science: Nature and field; Relationship to Social Sciences , Meaning of politics, Basic concepts, Political views, Democracy, Political ideologies, Party system and political process, Types of government, Concept of official apparatus,  theory of evolution, Indian Government and Politics, Constitutional development, Constituent Assembly, Fundamental Rights, Union parliamentary parliament, Judiciary, State executive and Indian Party. It is a living document if seen from the perspective of factual authenticity. It is comprehensive umbrella like compilation with inclusion of vast range of diverse ideas on the subject of political science and contemporary political theories describing about the various approaches and trends with regard to fundamental issues which directly affects the essential ideas such as justice, equality, human rights and democracy.

The magazine is mosaic of thoughts from as great political thinkers as Chanakya, like Laski, Hegal and Kant. Among the thinkers of Indian political science Raja Ram Mohan Roy, MN Roy, MK Gandhi and Pandit Jawahar Lal Nehru  and thus triggers  a chain reaction process in the minds of students to initiate  logical and systematic discussion on  the foundations and framework of the modern political systems with special reference to Indian polity. There is a choice and opportunity with the aspirants to fully comprehend the churnings, themes and set of philosophies that gave rise to the great document called the Constitution of India.  It is desired that students will fully utilize sections /chapters on the Indian constitution such as Fundamental Rights, Directive Principles and Fundamental Duties, Union Legislature and Judiciary, Federalism and the Party System in India to their advantage.

The chapters on international  political perspective deserves the due attention as the world of today is intricately woven with destiny of individual nations and nothing can be understood without taking into consideration the  developments shaping contemporary political firmament. The biggest international organization is the United Nations followed by WTO, EU, ASEAN and SAARC which have been fully demystified in the issue. The growing stature of India with new paradigm shift in foreign policy in recent years has been analytically focused. The complex applications in the sphere of diplomacy have been fully decoded particularly in context of growing relations between India and its neighbors and the emerging geopolitical situation across the globe.