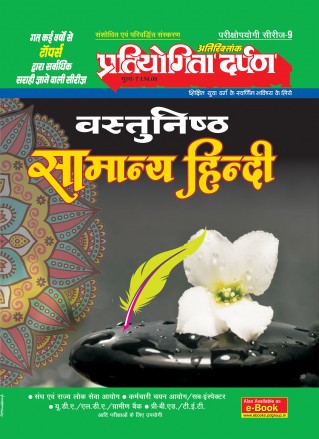 Objective General Hindi edition is the objective coverage of a range of grammatical constructions as well word powers which are considered essential in the development and enrichment of Hindi language. As we know in Hindi, nouns have gender—they are either masculine or feminine. Both masculine and feminine nouns are divided further into two categories. Hindi has three forms of the 2nd person pronoun. In our objective (question answer format) analysis we have based questions on Hindi syntax in such manner as to make the sense of the language clear while generating the interest in the minds and hearts of the aspirants and general public for the national language.

This is the authentic and comprehensive narration of rules of syntax of Hindi which is Subject-Object-Verb. While this can be varied, Hindi is considered an SOV language. Thus, the subject is usually at the beginning of a sentence in Hindi, while the verb is usually the last word. In addition, adjectives come before the noun they describe, just like in English.

In this objective Hindi book the Pratiyogita Darpan editorial board has left no stone unturned in clarifying the necessary ingredients of the syntactical structure of the language particularly on application of possessive case.  In Hindi there are three different ways to indicate possession, depending on what is being possessed. Each form uses a different postposition and the verb 'to be'. This is because there is no verb in Hindi that directly means 'to have'. Hindi has three tenses—present, past, and future. However, it uses other constructions to express complete actions, habitual actions, and continuous actions. To express incomplete or habitual actions, the imperfective present or imperfective past is used.

Then there is the vast vocabulary on the basis of which memorizing questions have been framed. Traditionally, Hindi words are divided into five principal categories according to their etymology: Tatsam words (words which are spelled the same in Hindi as in Sanskrit except for the absence of final case inflections);  Ardhatatsam words( Such words are typically earlier loanwords from Sanskrit which have undergone sound changes subsequent to being borrowed);  Tadbhav words (These are native Hindi words derived from Sanskrit after undergoing phonological rules and are spelled differently from Sanskrit); Deshaj words(These are words that were not borrowings but do not derive from attested Indo-Aryan words either); and finally Videshī words (These include all loanwords from non-indigenous languages like Persian, Arabic, English and Portuguese).

In the end we conclude by stating that right from the beginning when the development of Hindi language started the phases covering the stages of its evolution in terms of character idea, grammar similar words, spelling, parabolic words, antonyms, multicast words and collective word the book tries to do justice to the pride of India, that Hindi language is, in question answer format.