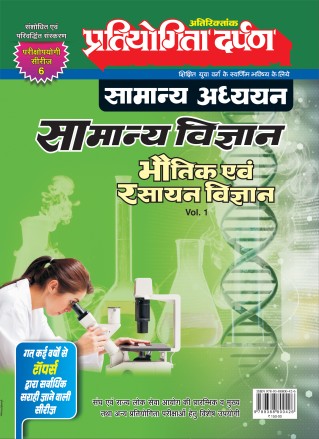 Pratiyogita Darpan General Science – Physics and Chemistry is an evergreen product in the world of competitive examinations. It is tried and trusted publication designed after studying collections of questions appeared in UPSC Civil Services prelims in recent years. It is simplified version of theories of Physics and Chemistry with basic science principles described in an interesting way. The concepts have been presented in a crystal clear manner with easy to grasp  approach so that even non science students can conveniently comprehend complex problems.

In this edition Physics, the natural science that involves study of matter, its motion and behavior through space and time, along with related concepts such as energy and force has been elaborately covered keeping in mind needs of the competitive examinations. Topics covered include properties of mechanics, sound and matter, speed on the rhythm path, circular motion, work energy and machines and Doppler Effect.  Chemistry, a branch of physical science that studies composition, structure, properties and change of matter and that all matter is made up of atoms; has been given  an authoritative treatment in this edition. Popular chemistry topics such as polymer and plastic, periodic table-one study, how atoms form chemical bonds to create chemical compounds, interaction of substances through intermolecular forces that give matter its general properties, and interactions between substance through chemical reaction to form different substances; have been discussed in different chapter. Chemistry has also been subjected to analysis in relation to the modern world, the environment, modern physics and biotechnology.

Pratiyogita Darpan’s current General Science issue on Physics and Chemistry tries its best to empower as well as enlighten students with a variety of facts and provides a large number of questions to them. Recent developments in the fields of chemistry and physics have been duly covered that include current science topics such as energy, nuclear technology, information technology, space research, communication and defence. Wherever necessary important formulae related to the both subjects have been highlighted.

We are aware of the difficulties that students who come from non science fields or humanities background face in these new disciplines as the formulae, principles and theories regarding these subjects bounce over their heads. Pratiyogita Darpan editorial board is seized of this concern and has invented technique of making our readers to understand these core subjects of General Science in as simplified presentations as possible. The taste of the pudding is in the eating. Once the book/issue is in your hands you can test us on the touchstone of truth and promise that we have again and again made in respect of committing ourselves to simplification of complex scientific fields/disciplines for UPSC aspirants as well as for those who are appearing in various other prestigious exams.