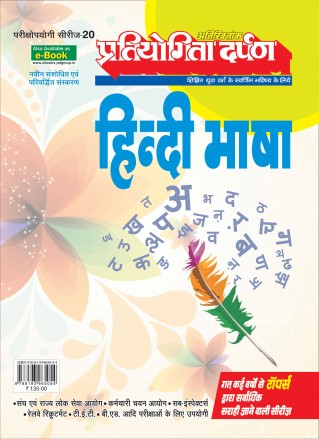 Hindi Bhasha is the standard book of Hindi Language which caters to the needs of students as well as competition aspirants. As w we know the language is descended from Sanskrit and is considered part of the New Indo-Aryan subgroup but it was also influenced, especially in vocabulary, by various other languages including Persian, Arabic, Turkish, Portuguese, and English so the approach of our editorial board in preparing the book has been to make it examinations- oriented. However it does not mean that it is, being the lingua franca, of the Hindi belt in India must not focus on the layman’s desire of learning and falling in love with the language which has got the status of official language of India.

Very few people know that Hindi is the fourth most-spoken first language in the world, after Mandarin, Spanish and English. So any book prepared on the subject should be like a living document on the various aspects of the language further accelerating the pace of journey to reach more and more people across the globe. Our approach is, in effect, global in making the edition. Who can oblivious to the fact that alongside Urdu as Hindustani, it is the third most-spoken language in the world, after Mandarin and English.

Our focus in the book has been on the roots of the language as we know that much of modern standard Hindi's vocabulary is derived from Sanskrit, either as native tadbhav words or tatsam borrowings from Sanskrit, especially in technical and academic fields. The book throws an elaborate discussion open  on the  Hindi standard, from which much of the Persian, Arabic and English vocabulary has been replaced by neologisms compounding tatsam words which is called Shuddh Hindi (pure Hindi), and is viewed as a more prestigious dialect over other more colloquial forms of Hindi. The edition is the comprehensive account of Hindi language, grammar, antonyms, synonyms figure of speech and idioms. The book is the crispy commentary on the normal syntax of Hindi, that is, Subject-Object-Verb. This edition covers the knowledge of Hindi Grammar which is varied in which the subject is usually at the beginning of a sentence in Hindi, while the verb is usually the last word.

On the whole we want to present correct perspective on Hindi grammar in our book regarding all the three cases of the language namely the Vocative Case, Nominative Case, and Oblique Case. The book treats nouns gender-- either as masculine or feminine. Both masculine and feminine nouns are divided further into two categories.  This brief account of the book has been put forth in accordance with our policy to make aware our beloved readers of the glimpses of the contents which they are supposed to grasp from the start till the finish of the book to get ready for the innumerable battles ahead.