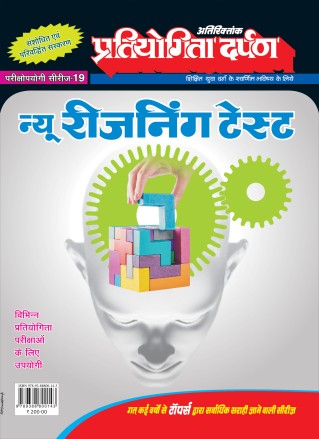 The New Reasoning Test (Hindi Magazine) on reasoning is meant to facilitate the understanding and reasoning by framing concepts in words. The magazine is a boon for the students and thus aims at evaluating ability of the students and competitors to think constructively, rather than at simple fluency or vocabulary recognition.

It has been seen that in the competitions verbal reasoning tests of intelligence are designed to have an assessment of aspirants’ ability to think, reason and solve problems in different ways. We have designed verbal reasoning tests in our magazine in such a manner as to fulfill the needs in entrance examinations conducted not only by SSC/UPSC/RRBs but also by schools, colleges and universities to select the most able applicants. The students must be aware of the techniques by going through the New Reasoning Test (Hindi Magazine) as to how this is used by a growing number of employers/government agencies as part of the selection/recruitment process.

In our analysis and presentation of the New Reasoning Test (Hindi Magazine) it has been found that a basic aspect of verbal reasoning is  proposition-a statement that expresses a judgment, opinion or fact about something. A simple statement such as "sharks are dangerous" is a form of proposition. In nutshell, in covering every important ingredient of the reasoning from proposition to syllogism and verbal analogies in the edition we spare no efforts in helping the readers to grasp the subject thoroughly in systematic and clear manner. Since all the concepts of reasoning are intricately woven among themselves their presentation in crispy and digestible format is a must condition to master the subject of reasoning. So, all the pillars must be having simplified analysis and interesting description. As we know a premise is a proposition that will follow or induce a conclusion. For example, a statement such as "John has no car and therefore won't be able to go to work today," has two premises which form the conclusion that John won't be at work. A syllogism is an argument that consists of premises in order to arrive at a truth. For example, "Mary is a woman. All women have hair, therefore Mary has hair". The validity of a syllogism also depends on how truthful or factual the premises are.

The chapters on verbal analogies in the New Reasoning Test (Hindi Magazine) deserve an extra attention as most of the question in the recent tests appeared from this chapter. Verbal analogies are comparison between two subjects or concepts based on their relations. An example of a verbal analogy is, "A car to a garage is like a ship to a shipping dock". The editorial Board of Pratiyogita Darpan worked on this section with clinically precise approach because it is this section that generates waves of interests in the minds of students for the whole subject.

Reading Comprehension which is an ability to understand complex language material like paragraphs or passages and able to answer questions regarding them have been duly focused in the current edition of New Reasoning Test (Hindi Magazine) . The analytical ability which lies at the core of the discipline is about understanding relationships in language material like statements or passages and being able to draw reasonable conclusions from them. It has been given maximum coverage with practical examples and analysis.  Logical reasoning, if mastered through this issue of New Reasoning Test (Hindi Magazine) make the students/aspirants capable in using critical thinking to assess and complete an argument given on the particular test.