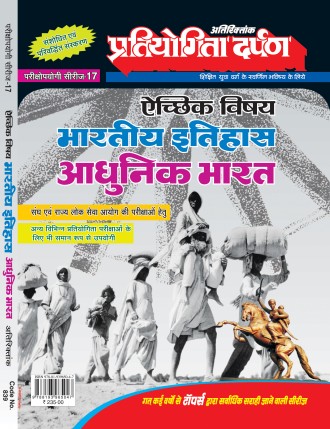 History of Modern India is one of the three parts of the Indian History. As an optional it’s a scoring subject as well as enlightening. This book covers colonial India period from the eighteenth century to the twentieth century. It chronologically tracks major events which led to rise of nationalism in India in 1857. Modern Indian history traces British imperialism and other aspects of Indian National movement. History cannot be read as a political narrative but should be analyzed and examined in the context of socio-cultural circumstances, their causes, effects and the consequences resulting from those circumstances; as these hold lessons for generations to come. Start of European trade, East India Company and Nawab of Bengal, British Foreign Relations, Indigenous state and British policy, British imperialism, Administrative development and social, cultural policies (up to 1857), British economic policies and their influence, Renaissance, Lower caste movement, Revolution of 1857 and Agricultural movement are the major topics which have been the source of devising the plan of this book.

British rule, the freedom struggle and the Independence interest and grip curiosities of any history lover. Factors that facilitated British rule over India for such a long span of time are critical part of discussion. From the death of Aurangzeb till the rise of rebellion in 1857 the book sequentially describes each and every event as it occurred and unfolded on the pages of History. The book is an authoritative account of modern history of India in a comprehensive manner and tries to answer some complex questions on the subject which are the apart of the syllabus of the optional subject for Civil Services exams in UPSC.

The analysis of major historical events like nationalist movement and rise of Mahatma Gandhi captivates the reader up to the last page. Looking into the recent trend of questions of UPSC, small incidents elucidate along with major stories that form bedrock of the book.

This book is worth reading for those having desire for deep insight  into the history of Modern India, besides aspirants / students who are preparing for civil services with history as an optional paper.