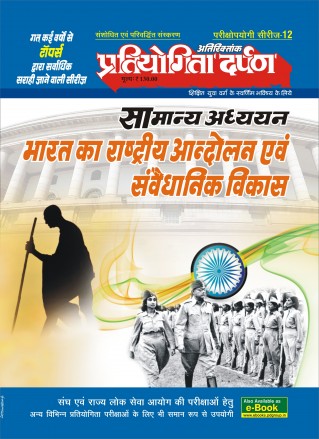 The edition of UPSC General Studies - Indian National Movement and Constitutional Development by Pratiyogita Darpan Group is an in-depth and detailed overview of Indian Independence Movement. The book has been written taking a holistic and close view of Indian National Movement and is its authoritative account right from the start of first war of Indian Independence in 1857 to achievement of Independence in 1947. It enlightens students about chain of historic events that shaped India’s battle to liberate the entire country from the clutches of foreign power.

This book is sequential and detailed coverage of the movement. Each and every chapter picks up bits and pieces of most of the occurrences significant from the view point of shaping the great spectacle of independence movement in a unified manner. It gives narration of events along with reasons and causes that triggered those events.  The way those events impacted Indian psyche in course of time and thus prepared a background for national unity to challenge British Empire and throw it out of India has been elaborately described in it. India's freedom struggle against the British rule is historic that holds lessons to the youth of India as well as the future generations of the world. This issue comprehensively covers movements prior to and related to Revolt of 1857 and subsequent political awakening as its outcome,  peasant and tribal movements, Quit India Movement, and other movements launched by the father of the nation Mahatma Gandhi, establishment of  Azad Hind Fauj and role of Indian National Congress in fight against British Rule.

The book is authoritative and based on research by scholars, comprehensively analyzing the pith and substance of the India’s independence struggle. The edition beautifully maps contributions of great freedom fighters such as Lala Lajpat Rai, Mahadev Govind Ranade, Mahatma Gandhi, Mangal Pandey, Maulana Abul Kalam Azad, Motilal Nehru, Ram Manohar Lohia, Ram Prasad Bismil, Ram Singh Kuka, Rani Lakshmi Bai, Rash Behari Bose, Sardar Vallabh Bhai Patel, Shaheed Bhagat Singh, Shivaram, Rajguru; and Subhash Chandra Bose whose slogan, : “You give me blood, I will give you  freedom”, still motivates us to serve the country with full devotion and dedication. No event - small or big - related to the national movement and constitutional development has been left out in our description. It’s our firm belief that, those who are preparing for Civil Services examinations and have taken History as their subject, will definitely be benefitted from this book.